15 Month Check Up and the last month or so 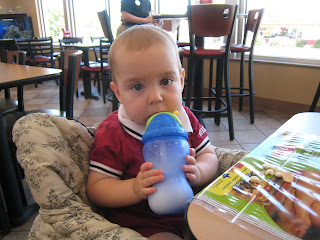 Successful trip to Chick-fil-a, using the plastic table mat. Usually, the table mat is in a ball and gets thrown away before Brandon begins eating. 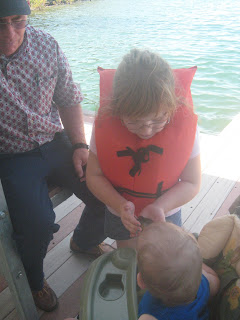 Branson weekend with the cousins, here Kendall shows Brandon one of the seven fish she caught in one hour off the dock at Table Rock lake. 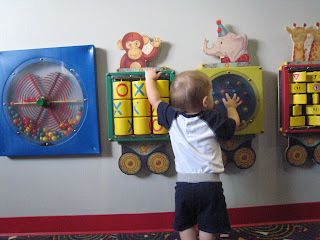 Jump Zone, one of my loves, Brandon likes going to JZ, and it wears him out so we have gone a few times the last few weeks. I think I get a work out too running chasing him around. 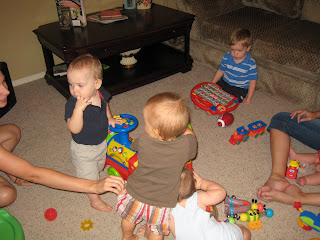 Here Ben and Brandon are receiving instruction about not taking Matthew's toy. I don't think they listened, sorry Lindsey. 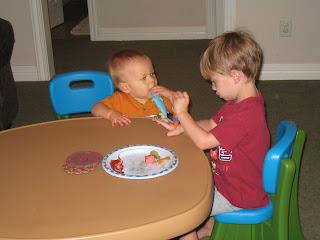 Play group this week was at my parents' house, this was my first time to host. It went really well. Ben and Parker playing at Brandon's new table from Sam's Club. I am super proud of this table. 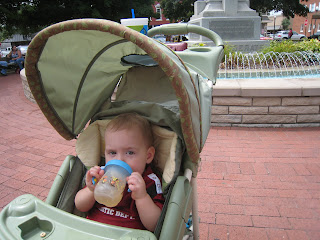 Today, Brandon and I kept the road hot, first we went to the Promenade for a stroll while the temperature was under 90 degrees. Then, we went to Sam's club for a hot dog combo, and off to the Bentonville Square for the First Friday event. The theme was Dog Days of Summer, so there were dog themed businesses represented. 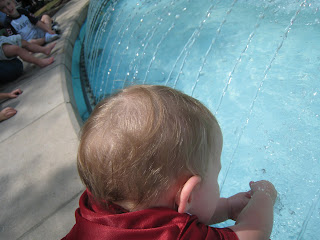 Here is Brandon's first time this summer in the fountain. He really liked it.

Brandon was 15 months old the end of last month, but we just had his appt. this Wednesday.

Brandon gained right at 1 pound since his 12 month appt., and he grew 1 inch in the same amount of time. His head is the same size as it was at his one year appt.

He still rides backwards in his car seat since the manufacture regulations need him to be 34" before it can be turned around. I have had his feet sized and he is wearing a 5 1/2W, and he wears 18 month clothes. He wears size 4 diapers.

He has taken a few steps, but he is primarily still a crawler. He took four steps to Jeremy on his 15 month birthday, and his motivation to take those steps was Jeremy playing with his phone.

Brandon loves phones and remotes. He is paying attention to the television, and recently he began waving at the television when the people on the television are waving. He plays with his puzzles, stacking buckets, rocking giraffe, and he enjoys being read to, and playing hide and seek in his room around the rocking chair. He is understanding "no", and when we goes for something he knows he should not get he shakes his head "no". 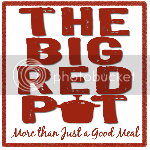